Want to be cool like your golfer friends? Here are the most common golf terms broken down for you.

We have asked countless players which terms they use most often on the golf course. So we’ve decided to summarize them here.

Using the proper lingo on the golf course makes you look more knowledgeable and is fun. There are hundreds of golf terms used by players every day. Stop missing out and start telling your buddies how you drained that 30 footer or skulled that chip 200 yards.

Ace, or also known as Hole-in-One, is the best score you can make on any hole. Ace’s happen most often on Par 3 holes but can come up on Par 4s or short Par 5s. Your odds of making a hole-in-one are about 12,500 to 1.

More common than an ace, but still very rare, is an albatross. You need to hole out on a par 5 with your second shot to score an eagle.

Still hard but more common. To score an eagle, you need to score 2 under par. This is possible on Par 4s and Par 5.

This means you shoot 1 under par. PGA Tour players Birdie around 15-25% of all holes. These are the best players in the world! More reason for you to be excited whenever you score a birdie.

Par is the number of strokes an excellent player will make on any given hole.

You score a bogey whenever you shoot 1 over par. On par 4, that’s scoring. Bogey Golfers are expected to shoot around 20 points over par.

Double Bogey means to shoot 2 points over par. You scored a double bogey if you record 5 points on a par 3 hole, for example.

One more than a double bogey, so 3 points over par.

This means shooting 3 over par, or 1 more than a double bogey. If you score a 6 on a par 3, you made a triple bogey.

Gross scores are the total number of strokes you made on a round or hole.

Deduct your handicap from your gross score to calculate your net score. If a 20 handicapper shot 100, his net score is 80.

This is a number, based on your previous rounds of golf, that represent your skill level. The lower the handicap, the better the player. Handicaps allow payers with different skill levels to compete with each other.

If you hit your ball into a hazard or out of bounds, you’ll add a penalty to your score. Usually, in the form of adding 1-2 points to your score, for the hole, the penalty occurred.

Golfers often communicate their score by mentioning how many points they’ve played, over par. On an 18 hole, par 72 round, shooting 10 over means you’ve score ad 82.

A short golf shot, typically made from around the green.

The first shot you take on a hole. A drive can be played with any club – not just your driver.

A short shot, but longer than a chip, you play with a higher-lofted club. Less distance than a full swing mainly used to flight the ball towards a target with accuracy, recover from the rough, or flight the ball below overhanging trees.

Golf shot during which the ball starts at the target and curves to the right (for a right-handed player). Achieved by creating an out-to-in club path with a slightly open face. The side-spin of the ball makes it turn while in the air.

A golf shot or drive you have hit exceptionally well.

Opposite to a Fade, the ball starts right of the target and curves to the left (for right-handed players). Most players hit draws further than fades because they present less loft and spin during impact.

A golf shot that starts left of the target (for right-handed golfers) and flies straight. During pulled shots, the club path was ou-to-in, and the clubface pointed left.

Many consider this a rude golf term. Used to describe a shot you’ve hit off the hosel of your club. Shanks typically start severely right of your target (for right-handed players) and don’t travel far.

The opposite of a pull. The ball starts right of the target and flies straight. During this shot, your club path is out-to-in, and your clubface is slightly open to the direction of the swing.

Used to refer to the club path. Out-to-in club path means the clubface moved from the outside to the inside during impact, and vice versa.

A golf shot that severely turns left (for right-handed golfers) without any significant distance.

Used referring to golf shots where impact was behind the ball. For a good golf shot, your aim to hit the ball first, then the ground. Fat shots travel significantly shorter.

A shot during which the swing arc is too high. The clubface only catches the upper equator of the ball, producing a low-high, low-spin golf shot. Thinned wedges usually travel further than intended but without control.

If you have a flyer lie, the ball usually sits up in the rough. Shots with flyer lies can travel further as you present less loft, and therefore less spin, at impact.

Lag putts are long-distance puts that you often do not expect to make. A good lag putter will be able to 2-putt from any distance and occasionally hole long puts as well.

Variation of the chip shot. Bump and runs are played around the gree, with a lower lofted club. The goal is to flight the ball a short distance and let it run out for long. This is useful if you have a lot of green between you and the ball. Bump and runs usually are more accurate than chip shots for beginners.

The short grass, between tee box and hole.

Marks the hole location. A long stick with a flag on top, used to indicate wind direction from a distance.

Short grass around the hole. Cut shorter than the fairways; greens are where you putt.

Mid to long grass alongside the fairway. Roughs often have a first cut and a second cut and can vary in length.

Designated are to hit your first swing of the hole. Different colors indicate different distances to the hole.

Method of maintaining golf greens. Done by punching tiny holes into the greens that open up growing room for grassroots. Aerating greens make them roll less pure but are a necessity for maintenance.

Short grass around the greens, slightly longer than the fairways.

The final 9 holes of an 18-hole golf course. Called the back nine because the lead back to the Clubhouse.

Opposite to the back nine, the first 9 holes of an 18-hole golf course are referred to as the front nine.

The tee box, furthest away from the hole. Often marked by black tee markers on the tee box.

Also called Turfgrass. It is classified as a “cool-season grass,” which means it grows far better in cooler climates than in warmer ones. Bentgrass is commonly the first choice of grass for putting greens in any location where it can be grown.

Probably the best-known grass for golf courses. Bermuda grass is used in warm-weather golf locations. On the negative side, bermudagrasses will die black in cold weather.

Any temporary water found on the golf course. Not defined as a hazard, players can take free relief if their ball ends up there.

A designated area where you drop the ball after a missed hit. Generally used for Par 3 over water, you will play your next shot if you lose one ball to the water hazard.

The direction in which the grass is growing. Essential for putting; Puts down grain are much quicker than when you put into the grain.

Are of the green, which is currently under repair/restoration.

Edge of the hole (or Bunker). Balls can lip out if your ball hits the lip but does not drop into the hole.

Out of Bounds / OB

Designated areas on the golf course marked as unplayable. Often marked with white stakes and on scorecards. Players who hit their ball out of bounds have 3 minutes to find it or need to return to their original location and hit another shot. If you find it, you are allowed to take relief and play your next shot. Both will earn you penalties.

A person overseeing the operations of a golf course. Rangers make sure that players are following the rules of the golf course, play, and etiquette.

Found on fairways and near the green (greenside bunkers), bunkers are concave bowls filled with sand. The type of sand can vary from hard to soft.

Links-style golf courses are courses with a natural and open layout, lying on sandy soil heavily affected by the wind. Traditional links course have no trees but thick rough grasses.

Opposite to Links-style courses, hills courses are defined as such because of their many fairway angulations.

Shouted after mistakenly hitting your ball towards a group of people. The word fore originated during the Middle Ages and indicates something is “ahead” or “in front of.”

Position you take just before hitting your shot.

Golf term used in Matchplay used to tell the score. All square means that the match is even; nobody is winning.

Mark of the ball, hitting the green. Greens need to be maintained to retain their quality. It’s essential players fix their ball marks after hitting the green with their approach or tee shot.

Yelled at balls you want to spin and sit shortly after impact. Bite is produced by backspin, so the ball either spins back after impact or comes to rest close to the impact position.

Mainly used on the green, break is used to describe the trajectory of your put. A left-brake will turn your ball to the left, requiring you to aim more right to hole the ball.

Method of gripping your clubs. Holding them further down on the shaft than usually. Chocking down on clubs can make them easier to control and will result in shorter shots.

Process of customizing clubs to a player’s swing style and body type.

Pice of turf that has been cut by a golf club.

To hole a shot, usually a put, from a long distance.

Type of lie you can find in a bunker, resembling a fried egg. The ball sits down in the sand in this lie, forming a small crater of sand around it. They can vary in depth. In a severe fried-egg-lie, the ball is practically not visible anymore.

A spot closest to the golfer’s ball but no closer to the hole from which the player can take a free drop (without penalty). Used in certain circumstances that are covered mainly by rules.

Order of play, where the player with the lowest score on the previous hole tees off first.

A player that consistently plays even-par rounds or has a 0 handicap index.

What to do next

Now that you talk like a veteran golfer, it’s time you learn more about the rules of golf! Here are 9 golf rules you probably didn’t know about. 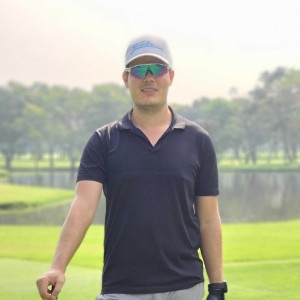 Francesco is the owner of My Golf Heaven and manages the team of experts writers on the site. He currently plays of a 4 handicap.

We have partnered with GlobalGolf.com to offer you the best deals for Golf Clubs and accessories! Click on the button below the view their offers.